MatMRI is a library to communicate with a Philips™ MRI scanner using Matlab or Python programming language running in an external computer. The purpose of MatMRI is to use very simple instructions to initiate the communication  with the MRI console and acquire images in a Matlab/Python environment, which opens quite a lot of possibilities for real-time image processing, data handling, interfacing with other devices, etc. Matlab and Python are quite deployed in many laboratories and most of users out there are knowledgeable of these platforms. MatMRI adds extra functionality such as multi-threading for an efficient data collection. MatMRI was designed to be as straightforward as possible and its use requires minimal coding.

In version 2.0, the following features were added:
And there is still new features to be added in the following months including more example codes and an even better MRI emulator to support swapping and restarting datasets.

MatMRI is being hosted at github as a private repository and it is aimed to be freely available to researchers under coordination of Philips Healthcare. Please contact me for further enquiries 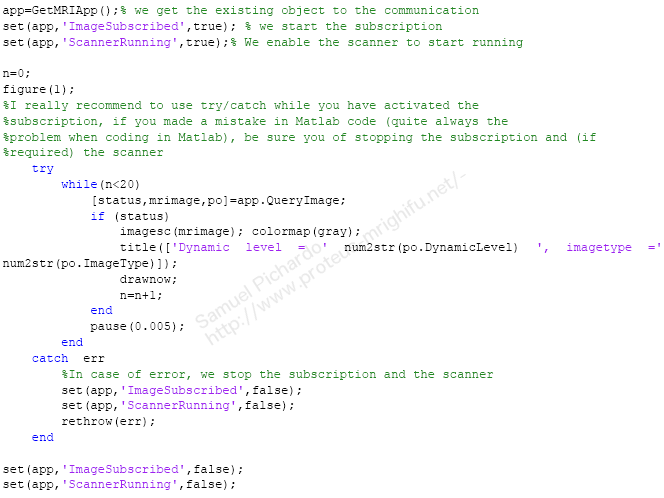 MatMRI was integrated with a small animal HIFU system and was used to capture multi-slice 2D images intended for planning as well as dynamic T1-based, single-slice images for the thermometry. In this example, a treatment with an acoustic power of 25 W was used to produce an elevation of temperature from 37◦C to 55◦C in soft tissue. For more details, please consult the journal article.