MatHIFU is a toolbox for the control of the  Sonalleve system in a Matlab environment. The Sonalleve is an MR-guided High Intensity Focused Ultrasound for therapy. MatHIFU allows the execution of user-defined treatment protocols such as thermal ablation, hyperthermia or drug delivery. MatHIFU allows the execution of treatment protocols where the user can specify the commands to be executed for the ultrasound exposure. MatHIFU can handle any number of protocols that can be executed according to the user needs.

Initial development of this project was done by my Research Engineer Tony Sinclair and later the undergraduate student Benjamin Zaporzan developed the current version.

MatHIFU is being hosted at github as a private repository and it is aimed to be freely available to researchers under coordination of Philips Healthcare. Please contact me for further inquirees

The most important commands that are available include:
Supplemental commands include instructions for basic workflow management of the sonication protocol such as commands for waiting for completion of a previous step or for interruption of an exposure. The combination of these commands allows a very flexible design of new therapeutic procedures.

The following code is a full listing of an example  to execute a simple sonication protocol and update it dynamically. The protocol creates an exposure with a power of 30W and 20s of length by default. Ten seconds after initiated the exposure, the power and location of the focal point are modified. The exposure is stopped 5s later. The final duration is 15s. 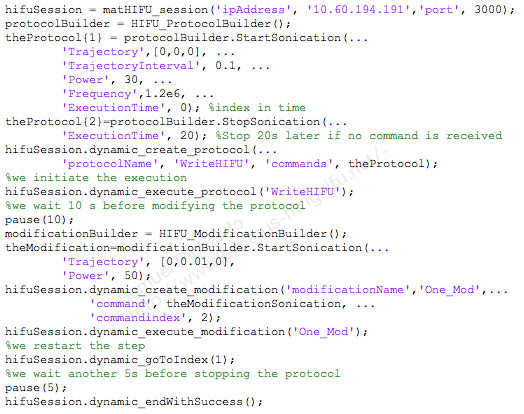 In this example for showcasing, MatMRI and MatHIFU were combined to produce a heating pattern that recreated the letters in the word "HIFU". Each of the ten lines in the pattern was produced by electronically steering the focal point along 18-mm-long lines over 8 s. LR denotes the left-right direction, and HF denotes the head-foot direction. For more details, please consult the journal article.